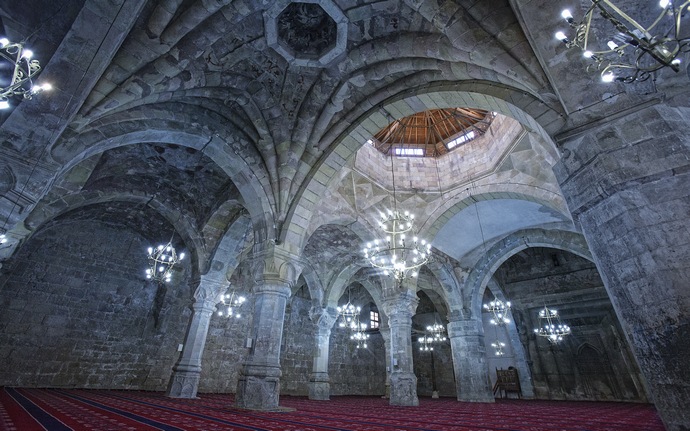 The Great Mosque and Hospital of Divrigi, the first Turkish building inscribed on the UNESCO’s World Heritage List, was built in the 13th century by Ahmed Shah and his wife Mellke Turan of the Principality of Mengucek. Designed by the architect Hurrem Shah, of Ahlat, in 1288, the Great Mosque of Divrigi is renowned for its monumental architecture, its hexagonal dome, and its unique stone carving decorations.

Art historians and architects agree that there are no other examples of the three dimensional and Intricate geometric styles and flowing figures of plants.

Its portals appear to have borrowed elements from Baroque, Seljuk and Gothic styles, but nevertheless represent a unique and distinct style of their own. All figures carved on the portals and on the walls are asymmetrical and each square has thousands of stone carved figures. The main characteristic of the designs featured In the portals is their uniqueness: each is distinct from other decorations. For example, the wreath of life used on the portal on the North facade is noteworthy since it depicts a totally imaginary plant world that only existed in the imagination of the craftsman.

As well as portals, all bases, shafts and capitals of the columns, and the Inner surface of the dome, were each decorated in a different, distinct and unique style.

The Hospital, situated next to the Great Mosque is, in itself, a masterpiece of stone carving. It shares the splendid unity of the Great Mosque. The Hospital is a two-story building with a central courtyard surrounded by porticoes, while the soothing sound of its water flowing from the fountains justify its design to be used as a hospital.

This exciting stone masterpiece shaped with love is waiting for Its visitors.